On Tuesday, February 26, 2019 at approximately 7:37 PM, 4th District officers observed an armed subject in the 7400 block of South Bennett. Officers pursued the subject to the rear of a residence where an armed confrontation ensued. Officers discharged their weapons striking the offender who was transported to the University of Chicago Hospital in critical condition.


On Saturday, February 16th, 2019 at approximately 8:31 PM, 10th District Tactical Officers attempted to stop a vehicle for a traffic violation.  While following the vehicle, officers observed the car strike a parked vehicle and curb before coming to a stop in the 2100 Block of South Keeler.  A male passenger exited the vehicle at which time an armed confrontation ensued, causing an officer to discharge his weapon, striking the offender.  The offender was transported to an area hospital for treatment of his wounds and is in critical condition.  Two weapons were recovered on scene.

19 DEC 18- Community Alert- 008th District- Seeking To Identify
Area Central Detectives are seeking to identify the above pictured subject assistance from who is responsible for the armed robbery which occurred in the 5700 block of S Archer Avenue on 12 November 2018 at approximately 5:45 a.m.  In the incident, the offender approached the victim inside an ATM vestibule displayed a weapon and demanded money. The offender fled in a gold colored SUV. 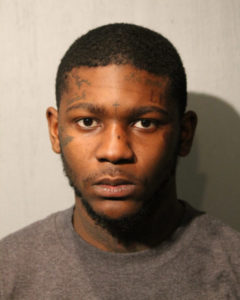