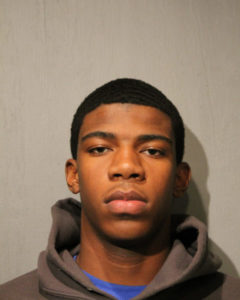 06 Dec 17 - Male Offender Charged in Veh Hijack
Evans was arrested after being identified as the offender wanted in a vehicular hijacking that occurred on December 4, 2017 in the 700 block of W. 31st St.  at approximately 2:30 a.m.  On that date Evans approached a 29 year–old female who was sitting in her vehicle and tapped on the driver’s window and told her to exit the vehicle.  The victim complied and Evans fled the scene with the victim’s car.  Evans along with two male juveniles were located in the vehicle on December 5, 2017 in the vicinity of the 1800 block of W. Lawrence after a vehicle check revealed it was taken in a vehicular hijacking.   The offenders were located and placed into custody and charged accordingly.  The two male juveniles, 16, were charged with misdemeanor criminal trespass to vehicle . No further information is available at this time.