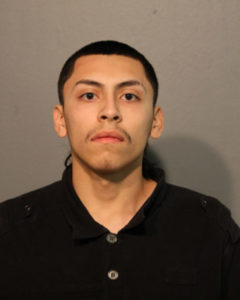 Ortiz,19 was arrested after being identified as the man who shot a male victim on April 10, 2016 in the 5700 Block of W. Belden at approximately 10:00 p.m.  Ortiz hid behind a vehicle and discharged a handgun in the direction of three males striking a 14 year-old male in the right hand.  The victim was transported to West Suburban hospital and is listed in good condition.  Further investigation revealed Ortiz’s location and a short time later, he was apprehended, positively identified by the victims and charged accordingly.