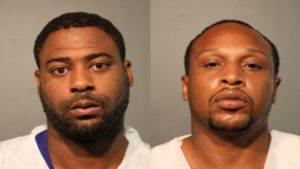 Michael Laster and Jonathon Thompson were arrested after they were identified as the men who shot and killed two men in the 5000 block of N. Winthrop on September 2, 2015 at approximately 2:15 a.m. Responding officers discovered two unresponsive males, ages 32 and 34. Both victims were taken to Illinois Masonic Hospital with multiple gunshot wounds. Both men were later pronounced. Laster and Thompson were charged accordingly. No further information is available at this time.