31 Oct 17 Comm Alert Att Child Luring 8th District JA492179
On Monday, October 30th, 2017, at approximately 3:15 p.m. in the 4700 block of West Marquette Rd., an unknown offender attempted to lure an 11yr old male into his vehicle. While the victim was walking, he observed a gray van or SUV pull over toward the sidewalk.  The driver stated that he was told, by the victims’ mother, to pick the victim up from school. The driver repeated the statement several more times. The victim refused, and walked away from the vehicle. The driver then fled the scene. 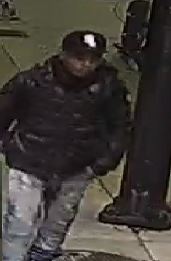 Area Central Detectives are seeking the public’s assistance locating the vehicle depicted above and identifying the owner of the vehicle [see attached video]. The vehicle appears to resemble a newer model, black Ford F250 or F350 pickup truck with black wheels (possibly a diesel engine). The wanted vehicle also has a large black tool box with a silver handle inside the bed of truck.

If you, or anyone you know, have any information regarding this wanted vehicle and the identity of the driver and / or owner of the vehicle, please contact the Bureau of Detectives – Area Central at (312) 747-8380.