WHAT: The Chicago Police Department’s Domestic Violence Unit is
hosting a book fair at Chicago Public Safety Headquarters.
Department personnel purchase books, and for each book
purchased, a credit is donated to the Crisis Nursery. This is
the 10th year anniversary of the book fair, with the ongoing
goal for every child who stays at the nursery to have an ageappropriate
book to take home with them.

WHAT: The Chicago Police Department, in collaboration with Hope Community Church, is hosting a Gun Turn Event. During this event, community members will receive a $100 gift card in exchange for every gun turned in and a $10 gift card for each BB-gun, air-gun, or replica firearm – No questions asked! 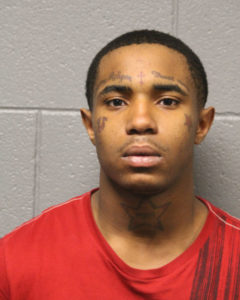 Ledarius Johnson was arrested in connection to a criminal sexual abuse that occurred on March 28, 2016 in the 2600 Block of W. Chicago Avenue at approximately 8:00 p.m. Johnson approached a 47-year-old female and pushed her to the ground and sexually abused her.

Robert C. Bearden III was arrested after a search warrant of his residence
revealed 55 cannabis plants, a large quantity of loose cannabis, along with
equipment used in manufacturing, processing and packaging cannabis. Also
confiscated was over $1600.00 in cash, a 9mm handgun, a shotgun and
ammunition.

WHAT: The Chicago Police Department 017th District will be hosting a Hispanic Outreach Community Beat Meeting. This event is
geared toward increasing police-community relations/trust
within the Hispanic community.

About the Crime:
This alert gives notice to the citizens of Chicago, particularly those who use the CTA trains in the 001st District, of Theft/Pocket Picking incidents that have been reported on the Blue Line trains proceeding southbound towards the Downtown Area from O’Hare Airport. In general, the offenders in these crimes usually work in groups of two or three to steal items from unsuspecting victims. After the offenders observe a prospective victim, one will typically create a distraction allowing another offender to bump into the victim and steal the victim’s personal property.  One such incident occurred at approx. 8 pm on March 23rd, 2016. After a Blue line
train stopped at Washington Street, one offender exited the train in front of a 59 year old male victim and then acted as if his foot had gotten stuck between the train doors and the platform. Believing the offender to be in need of assistance, the victim attempted to help him, at which point another offender bumped into the victim, taking
his wallet which contained various IDs and credit cards. The victim later discovered that his stolen credit cards had been used to purchase fare cards at a CTA Ventra Machine. The above pictured individuals are being sought in connection to this crime.

About the Offenders:
Two or Three black males, 45-55 years of age, various heights and weights. One of the offenders usually conceals their identity by wearing a surgical mask over their face. The offenders usually carry a clothing/garment bag to conceal the pick from other citizens and from the victim as the pick occurred.

What you can do:
• Always be aware of your surroundings
• Report suspicious activity immediately
• If you are confronted by an assailant remain calm
• Remember any unique physical characteristics (scars, limp, acne, teeth, etc…)
• Never pursue a fleeing assailant, provide the information to the police
• If video surveillance equipment is present, please save a copy of the incident for
investigating detectives
• If approached by a witness to the incident, request contact information
• Dial 9-1-1 immediately and remain on scene when possible
If you have any information
Contact the Bureau of Detectives – Area Central
(312) 747-8382
HZ198914
Reference: P16-1-029CA

29 Mar 2016
29 Mar 16 Armed Robbery – 18th District (HZ192210)
Bureau of Detectives – Area Central
Community Alert
Wanted for Armed Robbery
018th District (Near North)
About the Crime:
On March 18th, 2016 at approx. 3:35 pm, the male captured in the above pictures produced a handgun and robbed a victim inside of her garage on the 2000 block of North Kenmore Ave. The offender was described as a white male, 5’05-5’06,160-170lbs, with a fair complexion. The offender was seen driving the grey vehicle in the top picture on the right, believed to be a 2016 Volkswagen Jetta with an Uber X sticker on the lower, right side of the back window.
What you can do:
• Always be aware of your surroundings and report suspicious activity immediately
• If you are confronted by an assailant remain calm
• Remember any unique physical characteristics (scars, limp, acne, teeth, etc…)
• Never pursue a fleeing assailant, provide the information to the police
• If video surveillance equipment is present, please save a copy of the incident for
investigating detectives
• If approached by a witness to the incident, request contact information
• Dial 9-1-1 immediately and remain on scene when possible
If you have any information Contact the Bureau of Detectives – Area Central
(312) 742-5778 or (312) 747 – 8382
Reference: RD# HZ192210
Alert #HZ192210
March 29, 2016

The pictured offenders are wanted in connection with Burglaries occurring in the 018th District (Near North) throughout January and February. During these crimes the male offender broke a window to a business and took money from the cash register. The female offender acted as a lookout. Incidents have occurred along North and Milwaukee Avenues mainly between the hours of 12:00 A.M. and 5:00 A.M.