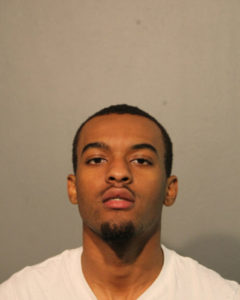 The offenders were arrested and charged after they were identified as the offenders in an armed robbery.  The offenders approached a male, 37 on December 11, 2017 in the 2000 block of W. Grace at approximately 9:54 p.m. and announced a robbery.  The female offender took the victim’s car keys, wallet and phone while Matthews-Hill held him at gunpoint.  The offenders fled on foot and were placed into custody by responding officers after a short foot pursuit in the 3400 block of N. Claremont.  A weapon was recovered along with the victim’s belongings.  No injuries were reported. The offenders were charged accordingly. No further information is available at this time.11Dec17 Male and Female Juvenile Arrested for Armed Robbery